Home/Uncategorized/New vineyards in Faugères
Previous Next

Building the Empire
Yesterday, Friday the 13th, we finally took possession of 5.5Ha of vineyards in the district of Cabreroles, AOP Faugères. The whole purchase began just after harvest 2012 when we owner of the land we had been leasing had decided that he needed to sell his land. He was asking ridiculous money for the vineyards so we happily parted company.
The problem was that this left us in quite a desperate situation where we had to find vines for the 2013 harvest or we would be well and truly in a difficult situation. The reason that we were leasing land in the first place was so that we could have time to find the land that we really wanted to buy. We longingly looked at several vineyards in the area and by luck one of these came up for sale. We heard through a friend that this particular land was available as the couple who owned the land were getting divorced. The local vignerons must have been chuckling as word got out that we had signed the initial papers for the sale as they would have known how complicated and frustrating this purchase would be for us!
First we had to go to a Tribunal so that the courts could decide if the sale was fair for the divorcing parties and the bank, where the land was fully mortgaged. Then the sale had to be approved by SAFER. Then it had to be passed by MSA and then there was another parcel of land that was owned by the wife’s father-in-law that had to be signed off by another bank. Of course we had to find finance as well which took several months of negotiations. All was finally in place and we were in the office to sign when a last minute hissie fit between the divorcing couple put the whole thing in doubt. Tempers cooled and reams of paper signed and late last night it was confirmed that the land was ours. Nine months of patience, tears, frustrations and finally overwhelming joy!! 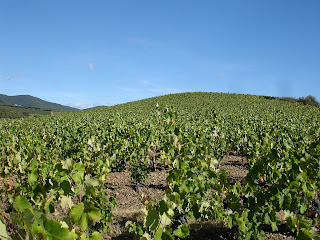 So now we are proud owners of lovely Syrah on trellis and some Mourvedre and Grenache trained as bush vines or gobelet. All of the block is on a south facing slope of beautiful blue, grey schist soils. We have started picking already and the fruit looks amazing. Happy days.
By admin|2016-12-14T09:39:13+00:00September 14th, 2013|Uncategorized|0 Comments

About the Author: admin

This site uses Akismet to reduce spam. Learn how your comment data is processed.

We use cookies to ensure that we give you the best experience on our website. If you continue to use this site we will assume that you are happy with it.OkPrivacy policy